“Book it to Class” A Winner for Quincy College

The “Book It To Class” Marketing campaign won a Gold Award in the Total Advertising Category in the recently completed 33rd Annual Educational Advertising Awards competition sponsored by this
publication. 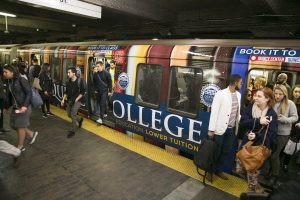 Rapid transit moves a lot of people. That’s one reason why there is a plethora of advertising inside these train cars. One of the advertisers on the MBTA (Massachusetts Bay Transit Authority) is Quincy College.

The school had carved out space in its media budget to be a regular advertiser with the MBTA. That is why it was one of the advertisers contacted by the transit authority when a decision was made to offer train wraps as another promotional possibility.

The college jumped at the opportunity, says Taggart Boyle, Associate Vice President of Communications and Marketing. “There is a train station across the street from our campus and many of our students take the train to get here,” he says.

The college handles all of its marketing and advertising work in-house. Taggart got together with his team to generate ideas that might work for a train wrap. “We looked at over 20 different designs,” he says. “Our ideas were failing. It would not work to take our existing creative and apply it. Essentially a train is alarge rectangle with blocked out windows. We wanted something that was a bold block of color with simple messaging.”

As the team kept working,there was an Aha moment and “Book It To Class” became the phrase and a bookshelf in a library motif became the design. The books would be arranged in rows but there would be no titles stated. The concept was a double entendre that would get people thinking. On the one hand, the image of the books explains one of the central  tenets of the college experience. On the other hand, “Book It To Class” can mean enrolling in classes at the college.

Enrolling is ongoing as classes start every month as is explained on secondary messaging inside the train.

It Works and Has Legs Too

The train wrap went live in October 2017 on a red line train. Not only is that the one that stops at the college, it also goes right through the heart of downtown Boston. “We got immediate responses from our own community who saw the train,” he says. “We had a lot of activity on social media. People posted pictures and called it The Book Train. We had a state
senator comment.” Because of this strong impact, the decision was made to expand the creative’s reach into billboards, both digital and traditional, placed off major highways leading to the campus. There was also advertising on the sides of buses as well as taxi toppers. “

What’s great about taxis is they are going through the back streets,” he says. All this was great for the college’s principal campus. However, the school has a satellite campus 30 milesway in Plymouth, a community that couldn’t be reached by its wrapped train. For that area, the college used billboards and the sides of local buses. The campaign’s goal was both branding and student recruitment.

Enrollment has been gaining at the institution in a period where some other two year schools in the region have not seen this level of growth. Wrapping the train has not been inexpensive. However, Boyle says that the huge numbers of people that have seen the images has made this a worthwhile expenditure.

The “Book It To Class” campaign won a Gold Award in the Total Advertising Category in the recently completed 33rd Annual Educational Advertising Awards competition sponsored by this
publication.

Quincy College is a unique two year institution. As a two year public college, it is not part of the community college system in Massachusetts. Rather, it is municipally affiliated with the city of Quincy, but does not receive any funds from the city. That means the school operates very much like a private school and is completely tuition dependent.

Altogether, Quincy College has 5,000 students, of which 1,500 are at the Plymouth campus. The average age of its students is 27 and there are a growing number of traditional students are looking at the affordability of the two year public alternative. The school’s marketing approach is segmented more through tactics rather than messaging.

Affordability and accessibility are the principal messages that go to all elements of the prospective student population, but may be conveyed through different channels. Depending on the audience that is being targeted, the department utilizes a media mix that ranges from traditional to digital formats. “We control the website and manage social media,” he says. “We manage all online advertising.” In addition to its advertising efforts designed to attract students, the department also works with internal clients helping to market internal events to the community.