Brothers Tom and Ryan Vassil will play basketball together at Quincy College next year. 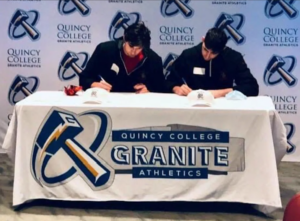 Ryan Vassil estimated he grew 3 to 5 inches from his sophomore to junior year of high school last year.

His older brother Tom, who stands at 6-foot-11, was gearing up for his senior season on the Whitman-Hanson Regional High boys’ varsity basketball team. So Ryan wanted to give the game a try.

“I had a big growth spurt,” Ryan said. “I was talking with [W-H] head coach [Bob] Rodgers and said, ‘Hey, I want to try out basketball.’”

Rodgers admitted this surprised him.

“You don’t normally have a kid approach the varsity coach when he’s never really played basketball and say, ‘I want to try and learn basketball. I see what my brother does and I want to give it a shot,’” Rodgers said.

But that’s what Ryan did. He attended basketball camp in the fall and earned a spot on the junior varsity team that winter. Then when the state tournament rolled around, the varsity team called him up, and he joined his brother. They ended the season as state champs following an 18-point win at TD Garden. Tom scored seven points in the victory.

“It was an awesome experience,” Tom said.

Said Ryan: “It was definitely a special moment, getting to play with Tom.”

Now the brothers will be teammates on the court again after signing on to join the Quincy College men’s basketball team.

“It means the world that we get to play basketball together,” Tom said. “But having him, someone who lives with me, we get to work all the time.”

Tom would have been going into his sophomore year of college this upcoming fall but opted for a post-grad year at Springfield Commonwealth Academy. He only played in three scrimmages before the went fully remote. He decided to unenroll. The good news? He was able to attend all of his brother’s home games this past season.

“It’s been really cool to see how much he’s improved because when he started — just like me — we couldn’t make wide-open layups, we weren’t catching the ball, so just to see the strides that he’s made is incredible,” said Tom, who didn’t begin playing basketball until his freshman year of high school. “He’s a really hard worker.”

The two have hit the court together as much as they can together — even before Tom departed briefly for school.

“She helped me a lot with my skill and confidence,” Ryan said. “I started getting more confident putting the ball on the floor and creating my own offense. Before that, I was an offensive rebounder and then I started making my own plays.”

Ryan averaged 4.8 ppg this past season as a senior for W-H, which went 12-0 and captured the Patriot League Keenan Division crown.

“He wasn’t just a big strong kid, he became a skilled kid,” Rodgers said. “He became somebody with great hands around the basket. He became somebody who understood the game and the little nuances of how to read a defense and how to react to what defenses do. He did it in a short period of time.”

But it’s more than what Ryan did on the court that caught Rodgers’ eye.

“I always tell my team that you win with character first and Quincy College is getting two kids that are off the charts with that,” Rodgers said.

Quincy College men’s basketball coach Doug Scott said he’s excited to infuse some of the winning mentality they established at W-H into his program.

“We are very excited to have both of them,” he said. “I love recruiting guys that come from a winning culture and great coaching. Basketball aside, we are getting two great young men that can be very successful if they put the hard work in.”

Their goals before college?

“I want to get quicker and also stronger and be able to play above the rim,” Ryan said. “I want to be able to hopefully initiate some plays — have a better game off the dribble, not too much catch and shoot.”

Said Tom: “I just need to get back into shape and get my body right. I haven’t had the opportunity to play basketball on an actual court since November. I’m really looking forward to playing with Ryan again — just having that brother connection.”