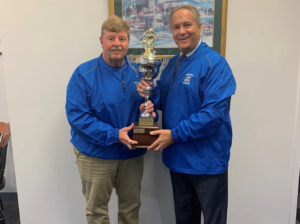 Like so many athletic programs, Quincy College is in wait-and-see mode these days. For instance, while the Granite’s 2020-21 sports calendar may have been radically altered by the COVID-19 pandemic, there’s still hope that the men’s basketball team can get on the court in January or February for some sort of season.

At the same time, and in a positive way, Quincy College is in “wait ‘til next year” mode – as in, next academic year.

Quincy, which began a small-scale revival of athletics in the fall of 2017, plans to add three new programs in 2021-22. Women’s soccer is expected to go live in the fall semester, followed by women’s basketball and baseball.

“We’re cautiously optimistic about men’s basketball being able to play at some point this season,” said Granite Athletic Director Jack Raymer. “But we’re gearing everything else towards next year. Our recruiters are out. We’re looking at the fall of 2021 to have all systems go.”

Raymer, a Quincy native who spent more than 30 years in the city’s public school system as a teacher, administrator and coach (he also coached at Xaverian Brothers High School) before un-retiring to oversee the Granite athletic department, is something of a recruiter himself: Besides reaching out to local high schools to make sure they know that Quincy College is a viable option for athletes looking to extend and expand their athletic and academic opportunities, he’s bringing in coaching talent to build and nurture programs.

Jim Dolan, whose deep local coaching routes include Weymouth and Archbishop Williams high schools and Lasell University), is recruiting Quincy College’s baseball team. Tashauna Ashmeade, who starred at Barnstable High and UMass-Dartmouth, has been put in charge of building a women’s basketball program, and Raymer expects to choose a recruiter/coach for women’s soccer soon. They’ll join Doug Scott, who has led the Granite men’s basketball team to a 50-27 record over its first three seasons, and John Furey, who got men’s and women’s cross country teams up and running in 2019.

Raymer’s goals are two-fold: Adding teams provides more options to local athletes who can work towards a degree or certificate at the two-year school, and perhaps take their credits and athletic experience to a four-year school. At the same time, sports can boost the school’s enrollment and profile.

Raymer, who played baseball at what was then Quincy Junior College in the 1970s, has always pushed what he calls the Three A’s — “an affordable academic and athletic experience” — when promoting the benefits of the junior college level for prospective student athletes. And while COVID-19 has challenged his school as it has all institutions, the AD thinks the pandemic and its fallout could in some ways make the Granite even more attractive.

Athletes at four-year schools, by and large, are not losing a year of eligibility if their respective sport’s seasons are cancelled, which is expected to lead to a logjam on college rosters and a temporary pause or reduction in recruiting. A National Junior College Athletic Association school like Quincy (where players also retain eligibility for seasons lost to COVID) can give a recent high school graduate a place to play and learn until programs at larger institutions return to normal.

“A lot of coaches from four-year colleges have said to us, ‘Hey, it might be a good thing for a kid to take a year at Quincy College,’” Raymer said. “They’ll get solid, transferable credits, play a year of the sport, and still have three years of (NCAA) eligibility left.’

“Even if it’s just one year, it’s great for them to participate at our level, and then move in (to a four-year school) with a year of athletics, and a year of core courses that will help them transition into a different school.”

Dolan, who started the baseball program at Lasell in 2008 around two stints at Weymouth High and a four-year run at Archbishop Williams that included the 2018 MIAA Div. 4 state championship, doesn’t doubt that the Granite’s athletic expansion plans will succeed.

“I always thought, just from growing up in this area, that Quincy College would be a great place to have athletics,” said Dolan, a Rockland resident who played ball at the former Weymouth North High School, and will continue to coach girls basketball at Weymouth High.

“I think it can be a great place for kids to start. You get a great education, right outside of Boston, it’s very affordable, and the people are great. The price, the location, athletics – you can’t go wrong.”

With the backing of Richard DeCristofaro, who was appointed president of Quincy College in April after almost 20 years as superintendent of the city’s public schools, and continued support from the college’s board of directors and instructors, Raymer thinks the athletic program is on the right path.

“We’re trying to do our part to bring students into the college,” Raymer said. “That helps the whole school. The fact that we’ve been able to do what we’ve done so far, and now expand it, is exciting around here. It really is.”