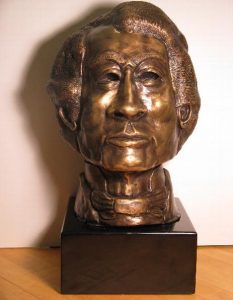 QUINCY — Quincy College adjunct professor David Englund, who teaches philosophy and history and is also a sculptor, has sold his bronze bust of abolitionist Frederick Douglass to the Nantucket Atheneum where it is on display.

“Frederick Douglass was a slave, ship caulker, free man, ordained minister, abolitionist, women’s suffragist, author, orator, editor and friend of President Abraham Lincoln,” England said in a press release. The sculpture, a bronze portrait, is based on images of his appearance after Douglass moved to New Bedford in 1838. Englund created the bust about eight years ago.

Englund, 88, retired in 1996 from Bridgewater State University where he taught philosophy for 32 years. He now is on the faculty at Quincy College where he is an adjunct professor and teaches philosophy and art courses.

He began sculpting years ago in Iowa and continued his studies in Boston. He took up sculpting busts of people he admires when he retired.

Working from a series of his own sketches, he models the head in clay. A rubber mold of the finished piece is cast in bronze at the Paul King Foundry in Johnston, R.I.

The 70-pound bronze bust of Frederick Douglass is 19 inches in height, appearing on a black marble base.

The Nantucket Atheneum is both a library and a community center and is open 6 days per week year-round for all ages.

Read another article about Englund here.