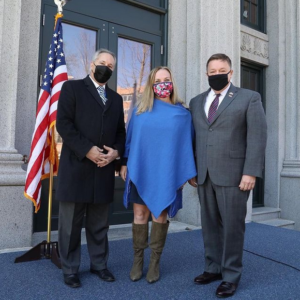 QUINCY — Mayor Thomas Koch announced several new programs meant to spur the success of the struggling Quincy College and named a woman to lead the building committee of a new campus planned for downtown.

In his State of the City address Tuesday, Koch spoke about the importance of the city’s support to the operations of the junior college and hailed the school as an opportunity for underserved populations, an economic driving force and a “great light of possibility.”

“It is a vital part of what this city will be in generations to come,” Koch said. “That’s why, today, I’m calling for a renewed sense of purpose, renewed commitment and a renewed investment to secure the future of Quincy College and secure the futures of countless of our young people in the coming years and decades.”

Quincy College, like many other institutions, has struggled with enrollment and finances for several years. The mayor acknowledged that some people have called for the city to cut ties with the college, which runs its own operating budget but is technically owned by Quincy. Last summer, city councilors questioned publicly if the school was more trouble than it’s worth as budget proceedings revealed a $2.4 million revenue shortfall.

“The college today is on much firmer footing than it was not long ago, but hurdles remain. The city must be a strong partner in these transformative efforts,” Koch said. “I believe wholeheartedly that the city must strengthen, not weaken, its partnership with the college because we have an undeniable responsibility to do so.”

Koch announced that the city will give the college $430,000 in Community Development Block Grant funding to provide 120 low-income residents who lost their jobs due to COVID free certificate-level training in fields such as health care, finance, human services and substance addiction counseling.

Koch, who chairs the Quincy School Committee, said the college is working to strengthen ties with the public school system and expand dual enrollment programs in early education, information technology and legal and protective services. He said the coming weeks will also bring the announcement of the “Early College” program, which will help low-income, high-need populations earn associate or bachelor’s degrees.

“Quincy College cannot thrive simply as a college in Quincy. It must be Quincy’s college,” he said. “The financial protections provided by the city will allow the college to continue its efforts to stabilize and help create the kind of flexibility necessary to expand programming, shore up existing cohorts and eventually lay the foundation for offering four-year bachelor’s degrees.”

The mayor also took the opportunity to double down on a plan he first announced at his inauguration last January that includes construction of a 15-story building to house Quincy College and city offices near the Hancock-Adams Common. The college currently pays rent for its offices and classrooms in the Presidents Place building across Hancock Street from city hall.

Katherine Craven, who is on the Quincy College Board of Governors, was chosen to lead a new Quincy College Building Committee. Koch said he will be before the city council this spring to discuss funding for the new building.

While he touted the benefits of the college to the local economy and the opportunities it provides to local students, Koch also acknowledged that its financial failing would present a large burden on the city. If the college closed, the city and its taxpayers would own all of the health care and pension obligations owed to the school’s employees, who are technically employees of the city.

“The college is not an isolated, stand-alone institution,” he said. “Its failure would cause a tangible, painful ripple throughout our local government, and it’s why we have a clear, vested interest in ensuring its stability and growth.”

The annual speech – delayed two months due to the COVID-19 pandemic and the mayor’s own battle with the illness – also touched on other major talking points that have dominated the conversation in Quincy over the last year: the ongoing pandemic and in-person education for public school students.

“These are among the most challenging times in recent history, but it is within those challenges that we saw and continue to see clearly the kind of place Quincy is – the perseverance of our people, our values, our willingness to help each other,” he said. “The state of our city, despite the long shadow of the last year, remains strong, and it remains poised for the future.”

The mayor said he “fully expects” that all Quincy students will have the option to return to class full time in the coming weeks. He praised the school district for its performance through the pandemic and called a return to in-person learning the “highest priority.”

“This has been an extraordinarily challenging, and frustrating, year for our kids, our parents and our schools. I would not trade what we have in Quincy, from the community to the school system itself, with any other city or town in Massachusetts,” he said.