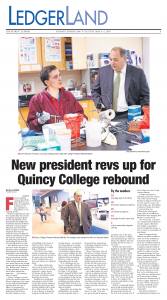 QUINCY —
Former Norfolk County Sheriff Michael Bellotti says when he stepped in as Quincy College president in September, it was baptism by fire. Bellotti’s appointment came five months after the school’s struggling nursing program lost its accreditation, three months after the budget was slashed by millions of dollars and amid a crisis in higher education that has forced small colleges to consolidate programs and cease operations because of sharp declines in enrollment.

He spent the first few months on the job controlling the damage and finding his place at the 61-year-old school, he said.

Now Bellotti says it’s time for him to make his mark in three key areas: enrollment, development of community partnerships and rebranding.

“I know some people probably perceived me, which I will be, as the exclusive face of the college and someone who works just on the outside pieces and with the stakeholders,”Bellotti said. “But as a college president, you have to learn, know and run the operation. …I’m learning what we need.”

Quincy College is owned by the city and its workers are Quincy employees, but it runs its own tuition-based budget separate from the city. It offers 35 programs for associate degrees and 25 for professional certificates.

Its main campus is a pair of buildings in the heart of Quincy Center. There is a second campus at Cordage Park in Plymouth. The school is not classified as a community college,which are state run, but serves the same role as an alternative for students who say a four-year school isn’t right for them.

The college and its reputation took a major hit last summer when its two nursing programs, a major source of revenue for the school, lost state accreditation amid declining test scores.

Students who graduated last summer were still able to take their license exams as planned, but dozens of other nursing students had to transfer to other schools or ride it out in Quincy in hopes the program would return. The nursing majors – an associate in science degree in nursing and certificate of completion in practical nursing – were re-certified in March and are set to accept students this fall.

But in many ways the damage had been done, prompting Bellotti to come up with a rebranding plan, he said. “It is a challenge, but we have to continually reinforce all the good things about the college that have been around for years. A lot of things haven’t changed,” Bellotti said.

The school made a few major investments in the nursing program following the loss, including re-hiring ex-dean Roxanne Mihal in July to rebuild the program’s standards and curriculum.

Meanwhile, the college has doubled down on its other science programs such as biotechnology, engineering technology, computer science and medical technician certifications. Bruce Van Dyke, chair of the Quincy College biotechnology and manufacturing program, says there are 92 students on a biotech track and the program has been full for the last seven years.

His classes are filled with people who chose the program for a variety of reasons – one student spent 20 years working in pharmaceuticals with a bachelor’s degree before enrolling in the school’s certificate program – and Van Dyke says they’re all on track to become laboratory technicians and research assistants. “There are a lot of jobs out there,” he said. “You cannot get this kind of training anywhere else in the state. We work entirely in disposable manufacturing, which is where the industry has been heading for the last five or six years.”

Bellotti says the biotech program is a perfect example of the type of real-world connection he wants all the college’s programs to have going forward. If local labs need technicians and startup tech companies need prgorammers, Bellotti wants Quincy College to train them, and he says he’s willing to develop and dissolve educational paths as need arises.

“We have to be more agile than the big institutions,” he said. “The way we are going to thrive is to adapt to the economic and industry roles in our area.” Bellotti commends department heads and administrators for the programs they’ve developed, but said even the best will succeed only if the college can recruit and retain students. College enrollment is shrinking across the country, with some schools seeing declines as high as 30 percent over the past five years, one Forbes study says. Enrollment at Quincy College was down 27 percent this year following the nursing program’s loss of accreditation, and Bellotti says stopping that decline is a top priority.

Two weeks ago, the Quincy College board of directors voted to approve Bellotti’s first budget as president, which included the money to hire a senior vice president of enrollment. Since he began the job, Bellotti has made an effort to reach out to the community, joining the Quincy Rotary Club, the workforce board of the South Shore Chamber of Commerce and the board of MassHire Career Centers. He said he’s in talks to join the Plymouth Chamber of Commerce, and that Boston Mayor Marty Walsh has talked to him about creating a regional college presidents group.

He said the networking is all in the interest of students. “When they walk through the doors, they have to feel that we’re with them every step of the way and know that we’ll move some of those bureaucratic obstacles they’ll find in a bigger institution,” he said. “We’re truly here to get them employed and we want them to know that’s obtainable.”