Quincy takes a 9-1 record into the second semester, and the National Junior College Athletic Association ranks the Granite at No. 8 nationally among Div. 3 programs. 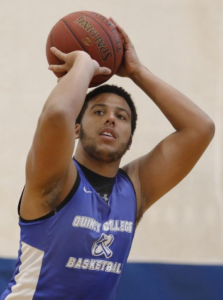 QUINCY — They’re basically flipping an old saying on its head.

Now, it comes out more like, “If at first you succeed, you’re still going to have to try, try again.”

At least, that’s one way to describe where Quincy College’s men’s basketball team stands in its third season. Year 1 brought outrageous success in the form of a 22-2 record, albeit some disappointment that as a first-year program, it wasn’t eligible for post-season tournament play. Year 2, with a roster stripped of much of its Year 1 talent by various means, brought the Granite back to the pack, at 13-16.

Year 3, which resumes with Saturday’s 2 p.m. home game against Quinsigamond Community College, looks a lot like Year 1. Quincy takes a 9-1 record into the second semester, and the National Junior College Athletic Association ranks the Granite at No. 8 nationally among Div. 3 programs. 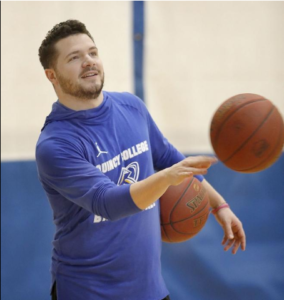 PHOTOS: Quincy College men’s basketball
New players? Sure, but that’s always the case at the junior college level, where players are limited to two years of competition. But this year’s crop has benefited from what head coach Doug Scott and his staff learned in Years 1 and 2.

“I wouldn’t say last year was a rebuild year,” said Scott, the former Quincy High School star in his third year at the helm, despite not reaching his 30th birthday, “but it was definitely a learning situation. I think it helped me, and it helped our progression. We may not have had the record we wanted, but it was a good season for our program in other ways.”

The Granite, for instance, is now keenly aware that as a program to be reckoned with, it must do some reckoning of its own.

PHOTOS: Quincy College men’s basketball
“People had us marked on their schedules,” Scott said. “It was ‘Hey, we’re playing Quincy College, and they’ve been a nationally-ranked program.’

“Our first year, we made it up to No. 2. The second year, we were a Top 10 pre-season pick. This year, we’re No. 8. So when teams beat us, it’s a celebration. We get everybody’s best. I think that’s going to help us in the long run. We know we can’t just show up.”

Quincy has also made adjustments to overcome some previous logistical challenges. Without its own gym (games are played at Eastern Nazarene College), the Granite practiced at Quincy High School from 9-11 p.m. for its first two seasons, which may have proved its players’ dedication, but wasn’t ideal when it came to their studies. This season, practices are held mid-mornings at the Quincy YMCA, so athletes don’t miss classes, and they’re alert when they arrive.

“Practice, class, study, weights,” Scott said. “Then we’re home in bed, getting a good night’s rest, instead of getting home at midnight or later, and having a hard time getting to class the next morning. Our whole philosophy is getting to work early, and then getting to class.”

“This is the highest number of kids we have coming back for the second half of the season,” said Mike McGee, one of Scott’s two assistants (Kendrick Jackson is the other) and an Information Technology instructor at the school.

“We learned from what didn’t work well in the past. We’ve changed our schedule, increased our communication with the instructors. It’s allowing us to have more success retaining players.”

Quincy hasn’t had any problem attracting players, especially local athletes who have become aware of the program’s viability and visibility, which carries with it the potential to help attract scholarship offers from four-year schools. This season’s major addition is Anthony Peacock, a sophomore who earned All-Scholastic honors at Braintree High School before spending last season at Harford Community College in Bel Air, Maryland, plus three Weymouth high products — sophomores Cameron Mason and Julian Mincey, and freshman Amondee Weaver.

“I’m after guys I think can play at the next level,” Scott said. “I’m at tons of high school games, evaluating talent. And as the program keeps growing, we like to think we’ll have more kids coming to us.”

Peacock, in a way, came back to Quincy. Attracted to Harford’s Div. 1 status, he spent an unfulfilling year there before coming home.

“I should have come here from the start,” said the 6-foot-7, 245-pound forward, who leads the NJCAA Region 21 in rebounds per game (13.8) and field goal percentage (68.4) while ranking fourth in scoring at 21.4 points per game — just two spots down from freshman teammate Damani Scott-Hankerson, who is No. 2 in the region at 22.4.

Scott feels certain that Peacock, former Mansfield High star Scott-Hankerson and Dorchester native Jerome Stephens are “scholarship athletes” who will ultimately play for NCAA programs. As he and the school try to make that happen, Scott also wants them to make the most of this season’s opportunity.

“With our depth and size, we’re a more mature team,” the coach said. “We’re a little stronger, with guys like Peacock, Mincey and Mason.

“Winning the region is our first goal, and if we can get into the national tournament, you don’t know what could happen. I think we’re in a good place to make a good run.”
