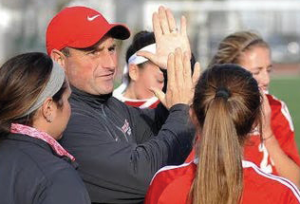 When Quincy College director of athletics Jack Raymer was finishing up interviews for the school’s first women’s soccer coach, he got an email from Ryan Puntiri.

Immediately he knew he had another interview to do.

Raymer’s instincts were correct, and Puntiri will be tasked with starting the Granite’s women’s soccer program.

“He was the perfect fit of what we needed here,” said Raymer. “If anybody was going to build a program, Ryan Puntiri is going to do it.”

Puntiri is excited to get back on the sideline after not coaching during the fall for the first time in 20 years.

“College coaching has always been a long-term goal of mine, but being a teacher, that path doesn’t typically work its way out easily because you need some time to do that,” said Puntiri. “The stars kind of aligned.”

Puntiri is no stranger to building up a soccer program. After coaching at Archbishop Williams and Braintree High, he built the Hingham High girls soccer team into a powerhouse program.

He spent 13 years as Hingham’s coach and won over 150 games, including three consecutive state championships from 2014-2016.

Hingham chose to not bring Puntiri back as the coach this fall following allegations of bullying by four players. When speaking to the Ledger in July, Puntiri denied those allegations. Multiple former Hingham players came to his defense and were critical of the school’s decision.

Via phone on Wednesday, he declined to comment on the situation with Hingham, which hired Sarah Dacey as the team’s new coach.

“I had no problems at all about hiring a quality coach and a quality person like Ryan,” said Raymer. “I had no hesitation at all.”

While at Hingham, he turned a struggling program into a consistent winner and helped send numerous players onto the collegiate level.

The task of building up a junior college program in Quincy will be even bigger. The women’s soccer team is one of three planned additions to the Granite athletic program, along with women’s basketball and baseball. Former Archbishop Williams High baseball coach Jim Dolan has been tasked with getting that program started.

“The ability to build it from the ground up is a pretty big challenge, but also something I’m really excited to take on,” said Puntiri.

The Norwell resident said the first task is to get the word out about the program. He’s also begun the process of looking for potential players who are already enrolled in the school. He said the school is planning to roster between 20 and 24 players and interested student-athletes can reach him via email at ryan.puntiri@quincycollege.edu.

Puntiri and Raymer both expect the program to begin playing games in 2021, depending on the situation with COVID-19. Quincy College is still holding out hope that its men’s basketball team can begin its season next month.

Although Puntiri anticipates a difficult recruiting process, he thinks his connections after two decades of coaching high school in the area will make the transition easier.

“The biggest attribute that I’m bringing to the table is the relationships with the coaches and knowing that many coaches,” said Puntiri.

“(Baseball coach) Jimmy (Dolan) and Ryan, their credentials speak for themselves,” said Raymer, who is entering his 50th year involved in high school and collegiate athletics. “That’s just a big plus for us — the way they’re so well known around the South Shore. Their name recognition alone is going to attract kids. They want to be coached by guys who won state championships.

Puntiri spent his time away from the sideline introducing his 4-year-old daughter, Anna, to soccer and ice hockey.

“It was tough,” Puntiri said of not coaching. “It was an adjustment. For 20 years, since I’ve been a teacher, I’ve been a coach, whether it’s been Archies, Braintree or Hingham. That was definitely an adjustment in an odd year anyway. … I spent that valuable time introducing my daughter to hockey and soccer, just being able to build our relationship even more so.”

During his time in Hingham, he helped send many players onto the collegiate ranks. Kira Maguire, Eve Hewins and Caroline Harkins all played on Hingham’s 2016 state championship team, which was recently chosen as the Patriot Ledger and Enterprise’s Girls Soccer Team of the Decade and went on to play at the Division 1 level. Harkins, a junior at Holy Cross, and Hewins, a senior at Princeton, did not have seasons this fall due to COVID-19, but Maguire bounced back from a torn ACL to play six games at the University of Virginia.

At the junior-college level, Puntiri said he is ready to cater to a variety of different student-athlete’s needs.

“Being a physical education teacher (at East Middle School in Braintree) for 20-plus years, plus having some real competitive high school teams, I think I’m well rounded in that verse where I can be there for the different types of athletes that might come through Quincy,” said Puntiri. “Some wanting to get to the next level and some just wanting to add two more years to their soccer career.”

Quincy College’s nursing program should be a draw for potential athletes.

“Once I met Jack and then the president, Dr. (Richard) DeCristofaro, they were just really nice guys,” said Puntiri. “They have great plans for Quincy and Quincy Athletics.”

“My big thing here is I call it the three As,” said Raymer. “We have an affordable academic and athletic experience. It can help a kid get to where they want to go. We’ve had three kids in our basketball program go to Division 1 schools over the last three years, so word has got out about our basketball program. … We’re hoping that we can build up that kind of reputation (in women’s soccer).”