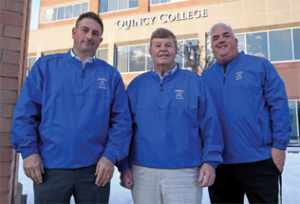 When Ryan Puntiri was officially named the head coach of Quincy College’s women’s soccer team in early December, it was unlike any other job he had taken in his career.

Puntiri didn’t even have a roster of players to examine since the team didn’t exist yet.

With help from athletic director Jack Raymer, Puntiri feels ready for the massive undertaking that awaits him as the longtime coach becomes the lead architect in building a program from scratch.

“I thought about it a few times (that) I get to be the first and we get to see this develop from wherever it begins,” Puntiri said. “It’s going to be something that grows over time.”

Puntiri starred in soccer and hockey at Canisius College in the late 1990s before getting into coaching. Puntiri had a successful 13-year run as coach of the Hingham girls’ soccer team, turning the Harbor women into a perennial power and claiming three consecutive Div. 2 state titles from 2014-16.

Puntiri’s tenure with Hingham came to an unceremonious end this summer when his contract wasn’t renewed amid allegations from parents that Puntiri verbally abused his players. Puntiri fervently denied the accusations.

He looks forward to the added responsibilities, like recruiting, that he has inherited as Puntiri has a goal of landing 20 to 25 players on his inaugural team.

“It is a new adventure,” Puntiri said. “I just like, not only the challenge, but the idea that we’re going to give more kids an opportunity to play soccer beyond high school.”

As Puntiri works his way to a finished product, Jimmy Dolan already has experience in starting a program from the ground up. Dolan resurrected Lasell College’s baseball program in 2008 and was brought on by Raymer in November to do the same for the Granite.

Dolan has a sterling baseball pedigree, having coached at Weymouth and mostly recently Archbishop Williams, where he won a Div. 4 state title in 2018. Dolan also serves as an associate scout for the Milwaukee Brewers.

He is now tasked with trying to put together a team by the fall that will be ready for its first season in the spring of 2022. Constructing a roster is the toughest obstacle facing both Dolan and Puntiri, as Dolan called recruiting “the lifeline of what you’re trying to do.”

Dolan, who is a Weymouth native, always thought athletics could excel at Quincy College and believes he can establish a program that will attract and assist student-athletes.

“The goal starting next September would be to start creating a culture and have it become a place where kids want to play,” Dolan said. “They can have some success and then God willing, we can push them on to four-year schools and keep playing.”

While the COVID-19 pandemic has inflicted strain on athletic departments across the country and in some cases, caused varsity sports at the collegiate level to be cut, Quincy College has pushed forward.

When Raymer took over as athletic director three years ago, the community college only offered men’s basketball, a now-thriving program under the direction of Doug Scott. Since Raymer came on, Quincy College, which competes in NJCAA Region 21, has started a men’s and women’s cross-country team headed by John Furey, who has coached the sport since 1986, along with a women’s basketball team coached by Tashauna Ashmeade.

Raymer said about 36 student-athletes last year participated in athletics, a number he hopes will increase to near triple-digits with the installment of the two new programs. Raymer sees an opportunity for student-athletes to play a collegiate sport that they might not have elsewhere and bring about a mutually beneficial situation for the college.

“Recruiting the athletes to come in, it’s a win-win for both situations,” Raymer said. “It helps the school and it helps the athletics and they help the whole camaraderie of the school.”

As Dolan and Puntiri get to work, they do so with a blank canvas. And for them and their future teams, there’s only one direction they can head in.

“It’s really an exciting time to see it being built from the ground up,” Dolan said.